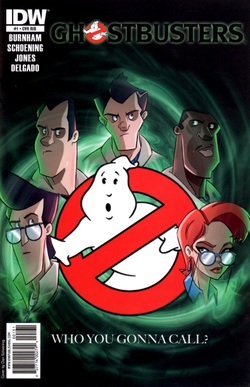 Summary: Are you troubled by strange noises in the middle of the night? Do you experience feelings of dread in your basement or attic? Have you or any of your family ever seen a spook, specter or ghost? If the answer is yes, call the professionals! Psychokinetic energy is on the rise again, business is booming for the boys, and Ray is troubled by what could be a prophetic dream... Is this an ill omen of an upcoming apocalypse, or just a little indigestion? These questions and more are raised in the first issue of the new, ongoing Ghostbusters! And is Mr. Stay Puft finally reforming after the battle with his doppelganger during the Infestation? Is that what's causing the huge PKE uptick in New York? As Winston and Peter take care of the annoying--and familiar--spook haunting the Crendall household, Ray receives a visitor at the firehouse... and this visitor could be what his prophetic dream was trying to warn him about.

Review: Its time to get a little spooky while showing no fear when a ghost comes calling! Despite that IDW brought these out awhile back, its only recent that I was able to pick up these 2 issues and experience what they have to offer with the Ghostbusters universe. And I have to say I liked it. Erik Burnham does a great job on the writing duties, and all the characters feel exactly like they would in the movies. Although with Venkman, I didn’t really care for how he sounded like a whiny douche through out the two books. But I’ve been told he gets better later on, which is something to be thankful for. I like that Dan Schoening’s art makes the characters look close to the live cast but also at the same time has a feel of looking a bit different to their real life counter parts. I am also loving the Blues Brothers moment in the 1st book, as it’s a great shout out to a man resting in the Blues level of Heaven. Even if he did bring a portent of potential doom. Venkman basically owning the Supervisor of a building they investigate is pretty sweet, and will certainly show him to better watch what he says if he doesn’t want trouble. 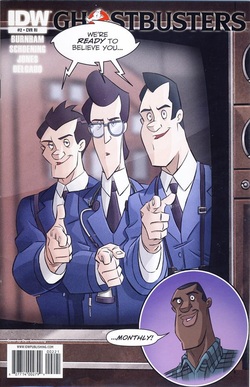 The conversations in these books will leave a smile on your face, which is another point in Erik Burnham’s favor. And the homage cover in issue 2 is another thing I love. Slimer being more than just an amusing ghost and causing a little havoc in this is pretty great. Guess he just got tired of being easily beaten! And during issue two, is it just me or is that a robot on that bridge? It’s a good thing that Winston has been doing some extra schooling, cause Ray sure needed that extra help! Now Mr. Possessed might want to be careful about where he’s discussing things, cause someone’s liable to want to put him in a straight jacket and a one way trip to the Nut House. A certain nuisance from the first film being in charge of anything close to the guys just smells like miles of bad road. And really makes me want to find the rest of the issues to see what happens with that. If you have yet to experience the joys of IDW’s Ghostbusters or even IDW in general. Now’s the time to go out and get yourself familiar. And now if you’ll excuse me, I got to go bust a ghost!