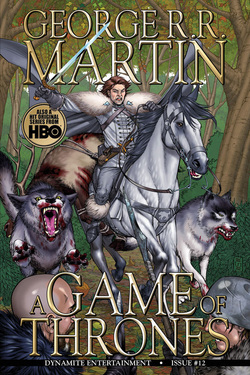 In the world of premium television, one show rules supreme. One show casts a mighty shadow on the others from above. it is the fantasy epic masterpiece know simply as, A Game of Thrones.

Game of Thrones represents the adapted story from the mega hit HBO series, which in turn is adapted from the critically acclaimed and top selling series of novels titled A Song of Ice and Fire. , the first book of which is called A Game of Thrones.

So what is a game of thrones you ask? It’s the most important game of all; survival. Either you win or you die. Bloodthirsty betrayal and vicious backstabbing are keys to winning and claiming the ultimate prize; ruler ship in the land of Westeros.

Ahh Westeros, a realm of dwarves, drunks, and dire wolves, full of rich back-story, and deep with fan fare. There is no doubt that the musings of author George R. R. Martin have spread far and wide and become immensely popular.  It was only a matter of time before a comic book edition hit the market.

It’s been a splendid seeing the pencil and ink versions of these much loved or much hated characters and whether they resemble the actor who plays them or re fashion themselves altogether, the real appeal of this series is the artistic interpretation of an already wonderfully imagined world.

Issue 12 brings us to a midway point of the first book where the plot is just beginning to thicken.

Story:  Robb Stark, his liege Prince Theon Greyjoy, and younger Bran Stark are traveling back to their home of castle Winterfell, when a group of wildlings take Bran hostage. Robb shows up and attempts the rescue but Theon ultimately kills the threat. They decide to take 1 of their attackers back to the castle for questioning, hoping to discover the motives of her people.

Meanwhile in the mountainous region know as the vale. Tyrion Lannister is being accused by Catelyn Stark of attempted murder on her son Bran Stark. Tyrion claims innocence and asks for trial by combat. An unexpected man volunteers to represent Tyrion in the fight.

Back at Kings Landing, Lord Eddard Stark, the king’s right hand is investigating the numerous bastard children of the king, when he is confronted by Ser Jaime Lannister.

Jaime demands to know why his brother Tyrion has been taken prisoner by Eddard’s wife Catelyn. In an act of spite Jaime orders his knights to attack Eddard’s guards. The result finds several of Eddard’s men dead and himself with a gimp leg.

Review: This issue features some important and memorable scenes from the novel & TV show, however the plot doesn’t really go anywhere in such short stints. Game of Thrones is a long development which doesn’t lend itself well to this format.

The writing is almost word for word the same as the TV version, so there are no surprises and lots of expectation. However if you haven’t read the book or seen the show, the story is told just as well here.

I do not like how the action feels too static as opposed to conveying a sense of motion.

The artist pays impeccable attention to details such as clothing and other highly recognizable and iconic imagery from the pages and screens.

The expression the artist is able to convey on each character is quite a remarkable feat.

Of course it wouldn’t quite be a fitting episode or chapter of the saga without a little nudity. The comic does us all a service by offering a tantalizing view of the naked breast of a very lovely young lady.

Sometimes the spacing of the characters in each panel looks and feels clustered, making it abrasive to the eyes.

The comic is mostly a compliment to the show or novels rather than a stand alone, but never the less it’s highly enjoyable, and a great collectors set.  Issue 12 is a nice piece of the pie.