Writer and creative director Roye Okupe launches his debut graphic novel EXO: The Legend of Wale Williams, based on a superhero from Nigeria (Africa) 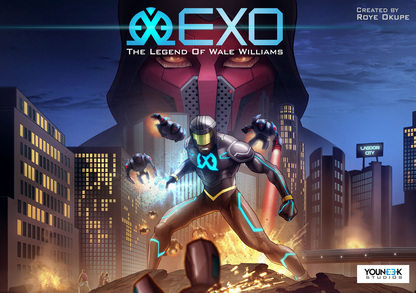 YouNeek Studios, the Maryland based transmedia company, is proud to bring to their fans the graphic novel, EXO: The Legend of Wale Williams. EXO will be a trilogy of books with the first split into two parts. Part one will be a 110-page book and it’s due to be released summer 2015.

Lagoon City, Nigeria 2025. Tricked into returning home to Nigeria after a five year absence, an impetuous young man named Wale (pronounced Wah-leh) Williams embarks on a journey to investigate his father’s mysterious disappearance. His only clue is a cryptic Nanosuit left behind for him by his father, a suit which grants superhuman abilities. As he comes to understand the suit’s powers, Wale realizes he must restore hope to the city by preventing catastrophic attacks from the sociopathic extremist, Oniku.

EXO was created and conceived by Roye Okupe, a writer who has his background in Film and Animation. In 2010 Roye served as an assistant director and editor of the feature film DComeback. He has also directed several animated shorts.

“From the first day I laid my eyes on the Teenage Mutant Ninja Turtles cartoons in the 80’s, I've been hooked on superheroes. Since then I've watched, played and read every single superhero related title I could lay my hands on: movies, superhero comics, manga, anime, graphic novels, superhero animated movies & series, video games etc. Then in 2008, after noticing there wasn't a lot of diversity within the genre, I decided to tell a story about a hero from Nigeria (Africa).” notes Okupe. 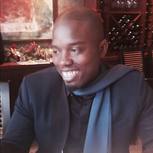 Beyond the graphic novel trilogy, YouNeek Studios has plans to release ﻿EXO﻿ as an animated feature sometime in the future. In a time were the public is beginning to demand for a more diverse slate of superhero comics and movies, YouNeek Studios aims to fill that gap with a library of eclectic characters.

“My mission with EXO: The Legend of Wale Williams is to put Africa on the map when it comes to telling superhero stories, be it animated or through superhero comics and graphic novels. We have so many people with a wealth of creative and appealing stories on the continent, but they never really get the proper commercial exposure. I myself experienced this when I approached investors and distributors. I was told it was a great idea, but there was no fan base for this sort of product. But I refuse to believe that. I believe if done properly (great script, good production values etc.), Africans and people all over the world will be receptive. We don’t necessarily love characters like Superman, Batman or Spiderman because of their place of origin. We love them because they have great stories we can identify with. That's why I took my time (5 years so far) in developing the story and characters. My hope is that EXO fulfills my life long goal of adding something unique to the superhero genre.”

Born in Lagos, Nigeria, Roye Okupe is a veteran creative specialist who holds both a Bachelor’s and Master’s in computer science from The George Washington University. His passion for animation led him to found YouNeek Studios in 2012, an avenue that would allow him pursue his dream of creating a diverse library of superheroes. Under that umbrella, Roye wrote and produced several animated productions including, but not limited to, 2D/3D animated short films, TV commercials, show openers, music videos and much more.
comments powered by Disqus
Powered by