DYNAMITE PARTNERS WITH GROUPEES.COM FOR THE FIRST-EVER
GROUPEES BUNDLE OF DIGITAL COMICS AND GRAPHIC NOVELS 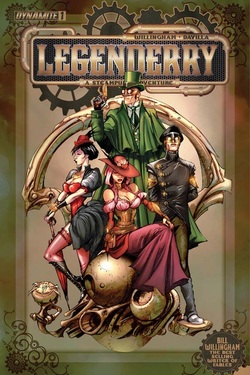 Benitez
March 26, 2015, Mt. Laurel, NJ:  Dynamite Entertainment is proud to announce that Groupees LLC, a unique media and charity bundling site, will host - for the first time ever - a ten-day comic book bundle promotion that allows fans and curious newcomers to purchase over 80 digital Dynamite comics and graphic novels with "Pay What You Want" purchasing power.  A portion of proceeds will be contributed to one of the industry's most important charitable organizations, the Comic Book Legal Defense Fund. The bundle promotion will run from Thursday, March 26, through Monday, April 6, on the website Groupees.com.

Through the Groupees program, customers can purchase a bundle of digital comic book and graphic novels for a price they decide. The first tier of exciting digital content is unlocked with the dollar minimum investment, but consumers can double their take by reaching the $5.00 second tier. Dynamite offers a highly desirable batch of comics at the third tier for a $10.00 minimum investment, including the bestselling Dynamite Art of Alex Ross art book.

For those who participate in the "Pay What You Want" initiative with considerable support, Dynamite will reward the top ten consumers with special prizes. The Top Prize will see the contributor illustrated on the cover of an upcoming Dynamite comic book, alongside the title character, and the cover will be drawn by superstar artist Jae Lee. The winner will also receive 100 copies of the comic and the original artwork. The second, third, and fourth-highest contributors will be illustrated as characters on one interior page of a Dynamite comic book, while the fifth through tenth-highest contributors will receive a hand-drawn illustration of their favorite Dynamite character, illustrated by Jae Lee. Additionally, top-secret Group Bonuses will be unlocked for all consumers to enjoy when the overall orders reach certain thresholds. 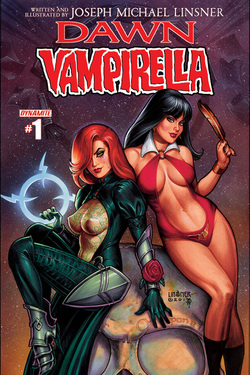 Linsner
"We're thrilled to be partnering with Dynamite Entertainment to offer this First Edition Dynamite Groupees Comic Bundle," says Thomas Brooke, Groupees Founder and CEO. "Dynamite has an exceptional catalogue of titles and is offering fans in this promotion an amazing deal on some truly exceptional books including the likes of George R.R. Martin's A Game of Thrones and Tom Clancy's Splinter Cell. As we expand into this category of media, we look forward to continuing to work with Dynamite to offer literary fans of all types curated, great deals during our online social events that connect fans and artists." 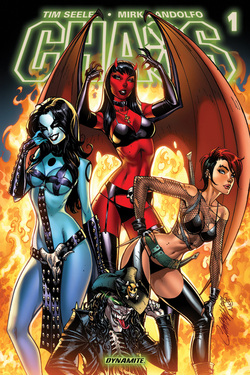 Finally, the $10.00 Minimum Tier features 17 comic books by Bill Willingham (Fables), Jim Starlin (the creator of Thanos from Marvel's The Avengers), and Tom Clancy (the video game Splinter Cell), as well as the bestselling Dynamite Art of Alex Ross, a 328-page retrospective of the influential painter's cover artwork and character designs on such characters as Vampirella, Green Hornet, The Bionic Man, the Kirbyverse, Black Terror, and more.

Nick Barrucci, CEO and Publisher of Dynamite Entertainment, says, "Groupees has a unique and incredible mechanism to engage fans and bring content to a new audience, as well as reward any fans of our existing audience who wish to take advantage of this promotion. They've built a model that stands out and can help grow the fan base for comics, which in turn can bring more readers to the industry, and that is extremely exciting. With comics being - if not the only, then one of the only - forms of print that has grown side by side with digital, we're proud to be working with Thomas and his team to create more awareness of comics among their audience, who in turn will come into our industry and many of whom will then become ongoing readers."

Part of the proceeds from the first-ever Dynamite Groupees Bundle will contribute to the Comic Book Legal Defense Fund, a non-profit organization dedicated to the protection of the First Amendment rights of the comics art form and its community of retailers, creators, publishers, librarians, and readers.

Fans and curious newcomers are encouraged to visit Groupees.com between Thursday, March 26, and Monday, April 6, to take advantage of the first-ever comic bundle hosted by Groupees.

Dynamite was founded in 2004 and is home to several best-selling comic book titles and properties, including The Boys, The Shadow, Red Sonja, Warlord of Mars, Bionic Man, A Game of Thrones, and more.  Dynamite owns and controls an extensive library with over 3,000 characters (which includes the Harris Comics and Chaos Comics properties), such as Vampirella, Pantha, Evil Ernie, Smiley the Psychotic Button, Chastity, and Peter Cannon: Thunderbolt.  In addition to their critically-acclaimed titles and bestselling comics, Dynamite works with some of the most high profile creators in comics and entertainment, including Kevin Smith, Alex Ross, Neil Gaiman, Andy Diggle, John Cassaday, Garth Ennis, Jae Lee, Marc Guggenheim, Mike Carey, Jim Krueger, Greg Pak, Brett Matthews, Matt Wagner, Gail Simone, Steve Niles, James Robinson, and a host of up-and-coming new talent.  Dynamite is consistently ranked in the upper tiers of comic book publishers and several of their titles - including Alex Ross and Jim Krueger's Project Superpowers - have debuted in the Top Ten lists produced by Diamond Comics Distributors.  In 2005, Diamond awarded the company a GEM award for Best New Publisher and another GEM in 2006 for Comics Publisher of the Year (under 5%) and again in 2011.  The company has also been nominated for and won several industry awards, including the prestigious Harvey and Eisner Awards.

Groupees offers at its website, groupees.com, "Pay What You Want" bundle promotions featuring video games, music, comics, ebooks and films. Groupees has processed over 1,500,000 bundle purchases over the past three years.
comments powered by Disqus
Powered by