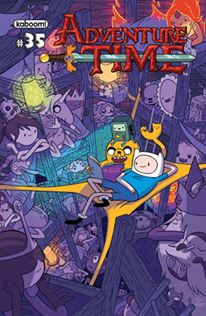 Summary: This issue sees Lumpy Space Princess interrogating all of her friends as she tracks down the culprit who stole her star that is generally placed within her head. We get to hear everyone's crazy alibis, but do we find out who the culprit is? Find out!

Review: Another totally rad issue from the guys running the totally rad Adventure Time comic! I had a lot of fun reading this issue, they did a great job at allowing everyone's alibis feel natural and dispersed just enough to see their connections but also feel wholly separate. I enjoyed BMO's noir style tale, and Princess Bubblegum was just all business towards Lumpy. It was fierce. Finn and Jake's imaginations ran totally wild, and the Ice King laid down some terribly harsh truth on the world.

“Sometimes all you can do is tell yourself that losing it was the best thing that could've happened to you, over and over and over again until you finally, finally, believe it.” - The Ice King, c. 2014

Just... wow. And that's one of my favorite things about this series is that sometimes these eternal life lessons just seep in naturally even in the most bizarre of situations. This issue we were given a stellar cameo by the Party God, who literally only parties 24/7, it's pretty amazing. And finally Marceline was just all sorts of upset that her song writing wasn't going as originally planned. It was pretty adorable really.

LSP is generally my least favorite character in this series, she's haughty and annoying, and her general “I am the absolute best” attitude tends to get on my nerves. By the end of this issue, she grew on me a bit. If even by a little bit. I felt for her in her time of need with her star, and I was happy she was able to come to terms with the fact that she no longer had it by the end. Also it was a lot of fun seeing how frustrated she was getting with everyone's answers.

We never do find out who the culprit is who stole her star, but really there's enough clues in the stories to figure out from here what really happened. I won't ruin what I think is the answer, but it's the obvious course it could've taken.

I didn't really have any big issues with this issue. it was pretty solid all the way around. I am curious as to how everyone came to be living in the same tree house, including the Ice King, but I'll just have to go back and read older issues that I've missed. No, I really think this is one of the strongest issues I've read of this series, and very rarely have any of the issues I've read of AT been bad. It's consistently good, and I really enjoy that.
Final Score: 4 Zany Alibis out of 5 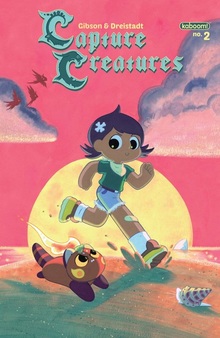 Review: The world inhabited by Tamzen ad the others is becoming more curious by the page. I'm really interested to hear more about this old war that had happened that cause us to lose “all the animals,” and what animals specifically? Were those old animals like ours? There's certainly mention of real animals amongst these strange creatures that are also beginning to pop up. That being said, the strange creatures are being treated as if they're pretty normal as well, so I'm just curious how the whole history of this world and its faun shape up in the grand scheme of things.

These questions to make certain things a little confusing, but get past all the animal stuff and this ends up being another fun chapter in the life of Tamzen and her Red Panda. Last issue ended up with us finding out the little guy can make fire ignite from his head. The revelation is played up for laughs, which I think fits nicely in with the childlike aesthetic of this series, but it also adds to the deeper mystery of these beings. We're also introduced to SEVERAL new creatures as well and it was really cool to see all the different ones.

In all honesty though, not much happens in this issue when you compare it to all the stuff that happened last issue. Our heroes get stuck somewhere on the opposite side of the island and get cut off from the rest of the island. A mystery figure also appears, and I'm curious to see what there play in all of this is.

The comic is still very kid friendly though, and the characters themselves remain fun loving and entertaining throughout. I like that. Kids do in fact read comics.

That all being said, my biggest issues with this issue is the fact that not much actually happens, as opposed to issue #1, and I'm really confused on how this world truly operates when it comes to animals. I'm sure we'll learn the answers to this in time, but if there were ”real” animals and these “other” animals, then I'm not sure why there couldn't JUST be the capture creatures (the “other” animals) and nothing else? There's not reason to add further complications into the mix.

Even so, I'm really looking forward to issue #3 and to find out where the next adventure takes us.
Final Score: 3 All New Capture Creatures out of 5
comments powered by Disqus
Powered by