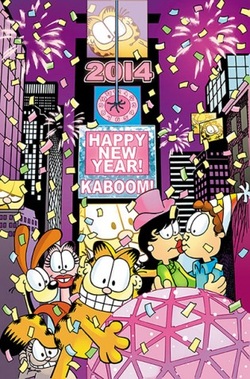 Intro: Ladies and Gentlemen: Garfield. He needs no introduction but, I’ll give him one anyway. He’s always been the charismatic, sarcastic yet charming shyster.

Who else could entertain us so much by being lazy and self absorbed? Who else could win over our hearts more than this over indulgent, pessimistic, excessively confident cat?

We worship Garfield for his clever insights, and ability to see the big picture while keeping it simple. He is kind of like our secret self; our subconscious ego unchained.

Every cat owner can and will tell you; there’s nothing quite like the relationship you have with your cat. Garfield is the epitome of this.

Story 1 issue 21 Synopsis: In a story very aptly named Fraidy Cat: Timothy the most timid cat you will ever met, is constantly in fear of.. well EVERYTHING. Yes everything and even the things that don’t exist. Timothy being desperate goes to the only person he knows who might possibly help him which just so happens to be the lasagna loving star of the series: Garfield. Timothy asks Garfield how to become a monster, because he thinks monsters aren’t afraid of anything. Garfield offers Timothy some sound advice while preparing for his next meal.

Later Bruno the bully approaches Timothy and chases him until the opportunistic Garfield turns on the sprinklers sending Bruno away. Timothy continues too obsess about becoming a monster. Meanwhile our loveable canine friend Odie is happily strolling down a dirt road and chances upon a monster encounter. Odie is quickly scared off and sent running home. The pint sized monster reveals that he just wants to be considered cute and is tired of scaring everyone.

Odie runs into Timothy and tells him of the encounter. Timothy decides to disguise himself as a monster but Bruno over hears his plan. Interestingly enough bruno mistakes the actual monster for Timothy in disguise and is horrified when Garfield reveals the truth. Timothy and the monster make a very friendly alliance.

Story 2 issue 21 Synopsis: As Garfield does his well practiced and performed past time of napping all day, a stray cat sneaks in an steals Jon’s left shoe. Jon notices the missing shoe and informs Garfield he won’t be able to cook lasagna without it. Garfield does what any resourceful and sharp witted cat would do: He gets the dumb dog to do it.

Garfield sends Odie to sniff out the missing shoe which leads Odie to the park. Odie discovers the shoe has been given by the cat to its owner: a homeless man with only 1 shoe. The cat convinces Odie that the homeless man is kind but too poor to afford a new shoe.

Nearby a woman is complaining to a police officer about her missing wallet. Odie and the cat take haste to search out the missing wallet. The wallet is retrieved by the pair of helpful house pets, but a pedestrian takes the wallet and offers to return it for them, however, the wallet is empty. The pedestrian explains that he deserves a reward and that the homeless man must have taken the money.

Odie, feeling a sense of justice and responsibility assaults the peculiar pedestrian, revealing the money hidden inside his suit. The woman offers the homeless man a reward for his pet’s good deed. With the Money, the homeless man is able to buy a new pair of shoes allowing Jon to get his oh so important, and terribly missed left shoe back. 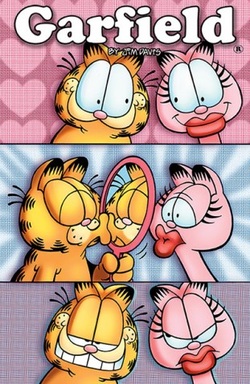 Story 1 issue 22 synopsis: While watching tv one day, Garfield’s aloof owner John Arbuckle gets persuaded by Garfield into signing a contract for the Lasagna of the Month Club. Little does he know that this forces him to pay for a seemingly endless amount of lasagna less he forfeit his house. Things seem grim until the cantankerous Garlfield inevitably comes up with an idea: An idea to fight fire with fire, which ultimately turns the tables on their swindler.

Story 2 issue 22 synopsis: Nermal, the worlds most adorable kitten, is once again sent to the very far away and obscure land of Abu Dhabi by Garfield, but this time he arrives in an unexpected place filled with kittens that equal his own cuteness. Nermal feels depressed by being average and discovers a unique opportunity to get back home,; in a beauty contest, but does he have what it takes? How will Nermal be able to re-establish himself as the absolute cutest kitten in the entire world?

Forever fun and light hearted, Garfield and his colorful cast tickle the readers with delight and enjoyable antics. It’s great to see this cartoon classic being presented so well. The jokes are baked in just deep enough to make you slap your knee and spit your milk. The book is a nice reminder that Garfield is a friend for life. 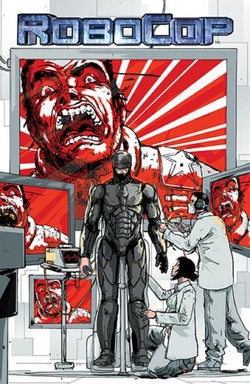 Summary: After a series of successful campaigns that cripple a portion of Detroit’s criminal activities, RoboCop’s system inexplicably goes down. While RoboCop’s consciousness remains, his control is gone. As crime rises in his absence, a paralyzed RoboCop must watch his city burn. For the first time, OCP will learn that control is in the hands of the man, not the machine.

Review: I am struggling with this one. I think like many of you that it’s going to be very difficult to divorce myself from the original movie. Of course I am not reviewing a movie so I have to stay focused on this present merchandising. And that’s what BOOM! has given us; merchandising for a movie tie-in.

Normally I like BOOM!’s titles, but this is not produced with the same dedication to passion and quality they have published previously. This was produced with a deadline hanging over their heads. As a result some of the work is sub-par. To me it is apparent those involved in the production either didn’t care about the source material (they were doing a job to get paid), or they so despise the idea of a RoboCop remake it adversely affected their work.

That’s not to say this title can’t stand on its own. But it’s so hindered by a need to be a movie tie-in it makes it close to impossible to stand on its own. Here’s an example I’m sure at least some of you can relate to:

In the Doctor Who franchise every book, radio serial, comic book, etc., stands completely apart from the well-known and much beloved television series. Naturally the stories are related (how can they not be?) and there are common elements, but when you read a Doctor Who comic that story is its own thing.

This new RoboCop comic book series needs to be its own thing. But it’s not.

Of course the remake (and that’s what I’m going to call it – REMAKE!) has come under fire since before pre-production. I’m not of the camp that would summarily dismiss the final product before even seeing the movie. My opinion, as with any movie and the review of this comic, is that it should stand on its own. If you’re going to remake a classic do something new and different. I haven’t seen the movie yet so I can only guess from what I’ve seen of the trailers and the clips is that they’ve tried to do that. I only wish BOOM! had done the same thing with this new title series.

I can’t blame the script by Michael Moreci. It’s well written. The pacing is nice and the action is appropriate; not over-done. Nor is the artwork by Jason Copland and the colors of Juan Manuel Tumburus an issue. The creative team is on point in doing their job effectively, though it bares repeating that it seems like they were under pressure to meet a deadline and thus produced sub-par work. The best example I can give of this is the lettering by Ed Dukeshire. No, it’s not poor work and it gets the job done, but just that. His work is, of course, very professional. It’s not distracting and it does not obstruct the art. However, it’s not his best work. I’m sure Mr. Dukeshire knows this.

In the end I could be wrong about all this, but I hope I’m not. Because if that’s the case it would mean the creative team just didn’t care. And I find that hard to believe.

As a launching point for a new title series this does not work. For any on-going series (or limited) you need to come to the last page and have a sense of “Holy crap, I can’t wait for the next issue!” BOOM!’s RoboCop does not achieve that. But I don’t think that’s going to matter very much to editors Ian Brill and Eric Harburn. As far as movie merchandising goes this fits the bill. Collectors will buy and a profit will be made.

Of course the movie could always do poorly, and that often affects merchandising sells.
comments powered by Disqus
Powered by