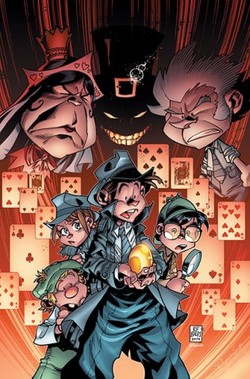 Summary: Frankie finds himself back in the midst of chaos on the streets of Rimes. While the case has been cracked wide open, he has less than a day to do anything about it. The Queens and Witches are waging a war staged by the mysterious knife-wielding man and the livelihood of stories from all walks of the world are on the line. Frankie may have messed up things in his own story, but this time he will not go down without a fight.

Review: Holy crap! Paul Jenkins is a freaking master of writing! The intensity, the hilarity, the twists and turns all the way from issue 1 to now has been written fantastically. And I don't know about you guys, but Simple Simon has GOT to be the BEST darn part of this mini series! Its not that often a character can unintentionally cause a riot to happen after all! Which if that doesn't get you laughing, I'm not quite sure what will! Also a really weird case of reverse psychology in play here that really just doesn't work out too well for the Captain! And poor Humpty man, that ol' egg has very likely gotten the worst of it in this title. But at least he more or less got the last laugh when it comes to the captain. The addition of Pansybell is another great thing Paul did here. I'm not entirely sure if she's just a character that was made up for this world or if she's actually in one of the many stories out in the world or what. But I love her. Let's go Rainbow Ponies!

Which really, that sounds like the name of a pony or a group of ponies from My Little Pony. Not that that is a bad thing of course. And feel free to tell me how close I am to that. Ramon Bachs and Leonardo Paciarottie have been superb through out this book as well with their art and colors. And if they were to have a hand in a cartoon adaptation of this comic, I'd be pretty darn happy about it too. They also capture the expression on Jack Frost's face perfectly after an encounter with Simple Simon. Though honestly, I think that would happen to anyone!

The 6th and final issue is soon upon us and I have to say I'm a little saddened by that too. As this has been a pretty great series, but hopefully Paul will make a return to it sometime soon. I also have to admit that the way Paul has used all the Jacks in the way he has is damn unique. How that's gonna play out in issue six is beyond me, but I definitely look forward to seeing what happens! Although something tells me a certain little catfight is gonna keep happening while ol' Jack is going to town. 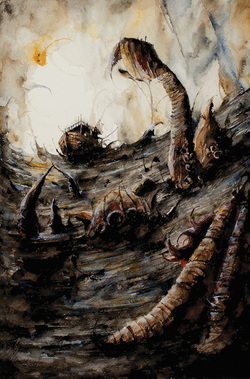 Summary: After facing off with an illegal Chinese vessel, a gang of Somali pirates tries to board what they think is a research vessel, only to find themselves in the midst of a massacre. As their worst nightmares become reality, the 14-year-old boy who went from translator to reluctant pirate not only becomes the key to survival, but must decide for himself how far he is willing to go in the name of self-preservation.

Review: Alright folks, now this is one hell of a start to a modern day horror story. You’ve got uneducated Pirates roaming the seas for bounty, and what a motely mix of characters they are too. And thanks to the Translator we get to know a bit about each one. Many times family aren’t those whom you are born into, but those that you surround yourself with. And in this instance they are a family, one with a tough and simultaneously insecure father figure.

We open the story with two attacking each other and the Chinese having a much nicer vessel than our crew does. We also see how the Translator handles himself in his first fire fight, and well it’s not very good. He’s a kid though and I like the perspective we’re getting here from Swifty, we see it all through this boy's eyes and experience through his senses and that makes it more real in a sense. He’s a scared kid trying to find a place in life and coming from a world where only the strong thrive.

After literally limping away from the fight with the Chinese the crew is lucky enough to encounter another ship that also seems dead in the water. There are moments before they reach this new vessel where you think, 'hey there’s an Octopus of Squid in the water with them maybe they’ll get attacked?' Nope that doesn’t happen but after boarding this new vessel, there are human body parts and blood everywhere which is an ominous sign indeed.

What happens as they begin to explore the ship is when the real horror begins and I love every minute of it. There’s something inherently creepy about a ship like this. Dead in the water with blood everywhere and a human hanging from a door that should have sent them all running as far from here as possible. But they are pirates and will loot everything they can or have nothing at all, plus their ship is dead in the water as well and maybe they’ll find what they need to fix it here. I also like that at no point do we learn what’s happened here. Is this some sea creature come aboard the ship? Or has it been genetically altered? Or is some pathogen at play? We simply just don't know the answers to these questions. We’re in the dark and that makes the mind run through everything and that can creep you out much better than actually knowing.

Skuds and Jason do an interesting job on the interiors here. I really like the horror aspect of it all. They do a wonderful job on the things we see and how they have affected and interacted with the dead crew members they encounter. The chef guy too yeah that’s pretty freakin' intense stuff makes ya want to shiver. Yet I do have a problem, at least three crew members including Translator, Disco, and Dead Tooth seem to genderswap from one panel to the next, I can never tell if they are or aren't women. The writing describes them as male but the art depicts them as female so I’m a tad confused, and it’s kind of weird and distracting. Otherwise the others with their own afflictions come across very clearly. So perhaps it’s just a case of settling into the business of a monthly book. I don’t know but that is something they need to keep an eye on and iron it out.

All in all Archaia has thrown a very powerful offering into the ring and it should be read. Because the story itself is sure to give you nightmares.
comments powered by Disqus
Powered by