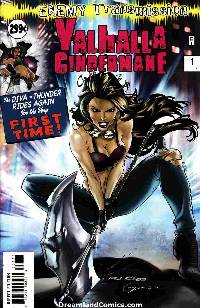 Summary: A night out for Valhalla Cindermane quickly turns into a bad situation while out searching for her lost love.

Review: Its time to return to return to the world of Enemy Transmission! And this time its all about a hot chick with a big honking ax! And a particular smile that promises much pain with said ax as seen on the lovely cover. Now the first thing you'll quickly realize is that she's a fair bit more arrogant than what Perilous is. Not to mention doing something that the X-Man Gambit is well known for when he talks. Now about the only problem I really have is how the book was set up. And for all I know I could be the only one who has this problem. The book starts off with Cindermane on a nice evening motorcycle ride in the city. Which I kind of think would interest my ex cause of her own interest in motorcycles. Hmm... Something to talk to her about next time I do so. *Ahem*... Moving on. Now necessarily this wouldn't be a bad start. But since it apparently takes place after a bar brawl that gets shown a little bit later in the book, that's kind of where I have the issue. As mostly that they don't make a mention of something happening at an earlier point. So new readers might be somewhat confused. But again, as I mentioned before. It could just be me with this issue. I think a lot of what happens is bound to be what sets up the later issues between Cindermane and Perilous. As Mr. Blue Man shows up during when everything is going on.

I'm not going to spoil it for anyone who doesn't have Enemy Transmission related material on their Facebook pages. But there's a reason for my bit of speculation. A reason I hope I eventually get to read about! Now I find myself rather liking the pencils of one Axel Gimenez, along side Goiz' inks and colors. As they all mesh together fairly great, and something I doubt hardly anyone would have an issue with. And as I was saying earlier about Perilous, if you haven't already read his first issue. His back story also winds up getting covered in Cindermane's book as well. Which is also pretty nice too if you have yet to read his book for whatever reason. Although he seems to have something of an ulterior motive for why he's at the place he's in. But at least he's having fun with guessing a researcher's name! Pity the fun and games has to end though. And as I mentioned earlier, I can certainly see why there might be friction between Cindermane and Perilous due to her own actions in what happens to the researcher and her child. Now she meant well, but she couldn't have known how bad things would get once she got involved. Pity the cops have to get involved when Cindermane's dispensing her own brand of justice! In what I would think of as full on Valkyrie style! Although we seem to have some sort of sicko also hanging around who likes to shoot himself as well. Michael Kuty certainly gave us a pretty good start off with this book. I know I certainly look forward to finding out how Perilous pulls off a miracle with the researcher. And whether or not Cindermane manages to drink more bikers under the table! Say... I wonder if she could do that to Thor? I'm also rather curious as to why Cindermane seems to not be all that happy with how things are. But I'll just have to read further to find out more in coming issues! So if you haven't yet, and are always interested in reading about a strong female lead. Come on down and pick up a copy of the first issue of Valhalla Cindermane!
3 out of 5 Stars

A review by Tim Barklay from Comic Book Nerds Are Hot was kind enough to allow his review of The Goon title to be featured here. Many thanks to him and enjoy! 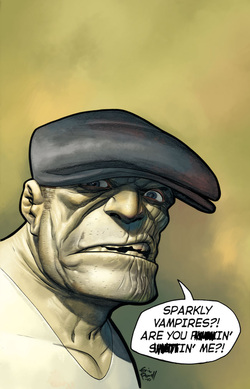 Review: Ever wanted to read about a depression era thug who fights zombies, hobos, sea monsters, monsters made out of wicker, monsters made out of mutant babies and insane burlesque performers? Then why the hell aren’t you reading The Goon?! Eric Powell has created something somewhat unique and altogether special with The Goon. A delightfully fun period comic, this series manages to blend ridiculous lowbrow humour with surprising dramatic weight. Oh, and there’s also a heck of a lot of punching.

The Goon follows the titular character, a hulking, heavily scarred thug, who works for the mysterious ‘Labrazio’. As the series goes on, it’s revealed that Labrazio is actually dead, and The Goon has taken over his entire operation, using Labrazio’s name in order to maintain credibility. The Goon is rarely without his loyal buddy Franky at his side. Franky is a skinny, brash, overconfident man with a love of a good scrap. The Goon and Franky spend the first half of the series battling their nemesis, the Zombie Priest, as well as hordes of zombies, monsters and assorted bad guys. Volume 5 was a turning point for the series, where Powell starts to take a slightly more serious tone on the book and his art begins to progress far more toward his soft, painted style.

Being totally honest, when Eric Powell begun the series he was not a very good artist. The first few trades are pretty rough, and he even released a ‘0’ trade called ‘Rough Stuff’, acknowledging his shortcomings as an artist. The real beauty of the series, however, is watching Powell steadily improve and evolve into an amazing artist. His use of soft inks create the perfect period tone, and the range of emotions his characters show is impressive, considering you rarely see the Goon’s eyes and Franky has no pupils. Dave Stewart’s colours certainly help, adding an extra layer to the already rich art. The characters themselves are masterfully created. The recurring group of orphans, known as the little unholy bastards, are like feral versions of the original Li’l Rascals, dealing with zombies and necromancers instead of losing marbles down exhaust pipes. Franky is loyal and violent, always picking fights beyond his ability. It always works out for the best, as Frankie relies on the confidence the Goon gave him and the Goon himself, who always comes to his friend’s rescue. Franky and Goon often talk about Charlie Noodles – a character we never meet, but always comes up in anecdotes. I love the fact that Powell can make us care for someone we’ve never seen or met before. The Goon himself is a deeply sad man. He has experienced a world of grief in his life, and Powell beautifully conveys this throughout the series. Scenes in Norton’s bar are particularly poignant.

The Goon is a hilarious, beautiful, touching and action packed package tied together with string made from pure awesome. If Tales from the Crypt was a comedy, it would be The Goon. If you want to start with the best, I’d suggest checking out volume 6, which is widely regarded as Powell’s best work. Otherwise, jump in from the start, knowing that things get a whole lot better as you go along. The series has won 5 Eisner awards, and deserves every single one of ‘em.

To check out more of Tim Barklay's work and along side the work of others, head on over to the Comic Book Nerds Are Hot website!