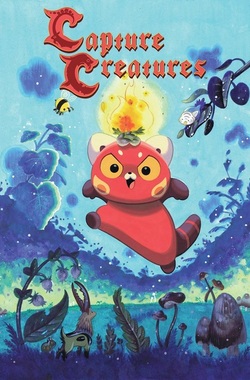 Review: Capture Creatures, created by the writer/artist team, is precious as all get-out. It's an all ages book and although we only get to see Bon Bon Fire in this issue – that's the name of the Red Panda – there's obviously more than one creature to be discovered in this comic. But will the owners of these Capture Creatures duke it out against one another in future issues? That remains to be seen.

Tamzen is an adventurous little girl who loves getting into all kind of mischief. But she's also really nice, and helps Jory get out of his comfort zone to explore a world he helped create. It's rather endearing and the way Gibson writes the characters he makes it easy to believe they'd become fast friends.

There's also a third main character, one of the Patrolmen of the zone, Mr. Bear (first name Teddy), who is probably my favorite character so far. Tamzen gets him in so much trouble when he tries to keep her from adventuring on, but you know he loves the adventures she gets him into. You can tell their pretty good friends, whether they show it or not. I think that's what made issue #1 as good as it was, we're being thrust into a world where – with the exception of Jory and Tamzen – everyone already knows one another; Gibson – and Dreistadt through her artistic depiction of the characters – make everyone very believable and quite frankly adorable to read.

Gibson leaves Bon Bon Fire's ability as a last page reveal, meaning we don't get very much about the Capture Creatures in this issue, but I think that was a smart decision. The way the characters act these things are brand new and mostly unknown which is cool. It also allows us to see some of the world they inhabit. With a new man-made zone, are these Creatures man-made as well?

Dreistadt's art style is not unlike Natasha Allegri's (Adventure Time, Bee and Puppycat), in fact I think this kind of very kid friendly, wide-eyes, rounded style is become sort of all the rage with original kids comics these days. And that's okay, it is a very nice style to look at. It makes the characters and their world stand out from one another. Tamzen is very asexual in her depiction, she is a girl but she could also pass for a boy as well. The characters in their looks aren't incredibly inspired though. Mr. Bear looks more like a mailman than a patrolman. Where Dreistadt's art style shines though is in her landscaping. Especially in the wider areas that make Tamzen and Jory seem so small, it's all very exotic and fun to look at. Also her style is incredibly fitting for the Creatures. Bon Bon Fire is incredibly precious and his angry face just makes me want to pinch his cheeks.

I'm looking forward to more Capture Creatures. The world these characters exist in is intriguing, and I want to see what other kind of creatures Tamzen and the others can discover as the issues roll on by.
Final Score: 4 Earthquakes out of 5 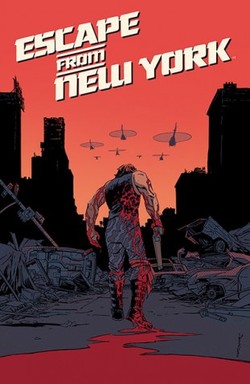 Summary: The crime rate in the United States has risen 400 percent. After humiliating the President in front of the world and destroying America’s one chance to end World War III, Snake Plissken has become America’s Most Wanted man in a land of criminals and the insane. Everyone wants Snake dead. Luckily, Snake knows the feeling all too well. War hero. Outlaw. Renegade. Snake’s back!

Review: Many people hold the same view about the original 1981 film – it's a classic. Much like any other classic, when a film is re-made, adapted into a play, a book, or a Comic, you have a challenge on your hands, because a precedent is now set.

When making a sequel or derivative work, or even an adaptation, your audience will always have an expectation to see what they loved about the original in there. Unfortunately, Escape From L.A. wasn't that great a film, enjoyable, but not particularly good. If anything, it seemed a little too light-hearted comparatively.

The author of this current yarn, Christopher Sebela, pulls out a story that kicks off directly from the end of the original film. Much like how John Carpenter and Rick Rosenthal did with the Halloween franchise. And for that reason alone, points are rewarded.

What follows is intrinsically Snake Plissken; throws a guard from a military car, who is instantly knocked out, hijacks a helicopter in a way only Pliskken can, and then, after escaping from an aerial crash, hitch-hikes with a group of friendly people in a van, who you just know “ain't right” from the get-go.

The three in the van are heading for Florida, which is now an independent state run by “The Twins”, so-called because, well.. they're twins. I must say, they have a very innovative system for border control, makes Cuba look like Disneyland by comparison.

All-in-all, the story in this is very fulfilling, it's pure Snake. It's ludicrous, the dialogue is clearly intentionally corny, just like in the original, and it's leading to the perfect “Escape” set-up. Remember Ernest Borgnine's over-zealous side-kick nature? The fact that pretty much everyone is just a bit mental in some way? It's not surprising why Snake is a bit grim, he's really the only sane person alive. And I say that, because pretty much anyone else who is dies anyway.

On to the art. Diego Barreto has a style very reminiscent of a combination of Ron Frenz and Klaus Janson. Specifically, Janson on his Punisher run, so it's an 80's-style. Even down to it being entirely hand-drawn. There's no polish here, and I quite like that about the art, it's indicative of its period. Okay, some might be expecting a more modern look, like Leo Manco. Who drew the first arc on BOOM! Studios' brilliant series Hellraiser, but the style works.

The trouble with Barreto is that he's really not a great story-teller though. While I can accept Pliskken taking out a chopper by shooting a cable to a pylon, what the art doesn't clearly portray is how it's possible. The same applies to when Snake hi-jacks the helicopter with the military car, it just doesn't flow. There's a 'missing link' in both sequences, which just looks sloppy.

To be fair, there's a lot of information to convey in this first issue. But if I'm able to sit there and think of several ways this could be done, then why wasn't it? What's the point of editorial staff if you let that slide?

Outside of that though, I still like the Barreto style and Marissa Louise provides perfect tones in the colour work. In the final analysis, criticism aside, this is still one of the better Comic outings for the franchise and I'll be picking up the trade when it's released. Over-all, I'd give this first issue a 7 out of 10.

Snake Plissken? I heard you were dead. Apparently not.
comments powered by Disqus
Powered by