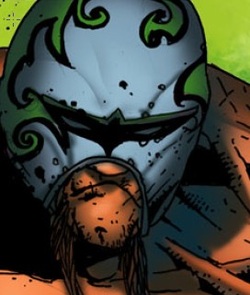 
Summary: A battle begins for one man in his quest to gain Freedom!


Review: Well now, its been awhile since I got to lay my eyes on a book that's filled with Stefano Cardoselli's work! Along side Rita Gorgoni at the helm of writing duties. And I got to admit, I love how she puts Supermonster into a bad situation right off the bat! Although if he was in there due to some bad things he might have done. Then no wonder Karma is having its sweet torturous way with him? Now for those of you who may not know Stefano's work. You should definitely look the man up, whether that's in a Heavy Metal magazine or on Facebook. He's always doing some great work, and you may just find yourself getting to like it as well! Philip Fuller's colors go very well through out the book as well. And I will mention that this isn't a title you will want your kids reading. As there is some adult scenes in here. Especially on the cover, man that girl is a beauty! Unless of course you are an open minded parent who doesn't mind letting their kid see some adult stuff cause you think it will help the learning development. Then go for it!

You may find yourself in shock once you see the Sumo in this book! God he must have been eating his beef and vegetables growing up! Surprised that man hasn't had a heart attack just yet! But I think he just might once Supermonster is done with him! As for Mad, I find myself reminded of a co-worker of mine. And frankly, it pleases me a little to see what happens to him. Since I wouldn't mind doing a little hurting to a co-worker of my own. But shh.. You didn't get that one from me. I kind of wouldn't mind having a mask like Supermonster's as well. Just looks very cool! Supermonster practically getting the short end of the stick is a definite downer, especially when all he wants to do is just get out of the place and have himself a little Farming time. Now while I read what is primarily a sample, its left me wanting more. And cause of that, when the full version comes out. I definitely want to read the entire thing! I think its going to be something everyone should read and add to their collection. Its definitely something that's a bit different then your average comic. Especially if you love bloody violent fights and barely clothed women! I do wonder though, is the whole bib boobed thing Stefano's way of mocking the mainstream industry for always giving women big chests? Hmm.. Something to wonder on! So keep an eye on Stefano Cardoselli's page for details of when you will get to see this awesomely violent comic in front of your eyes!