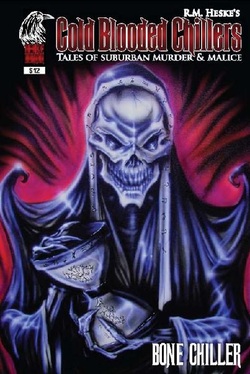 Now while death seems to be an overused concept these days in comics, at least if it’s in Marvel or DC books. It certainly does not feel that way at all in Mr. Heske’s Cold Blooded Chillers book. As death is a big theme all throughout it. Often serving as a way to provide Karmic Justice on someone who’s been a very naughty person or causing some straight up odd situations that makes you feel a bit lost or worse. The story of ‘Dead Dog’ is one such tale in this book that makes me scratch my head a bit. Mainly because what looks to be an ordinary every day Joe, turns into someone who’s a killer. This book also serves as a reminder for why it’s sometimes a very bad idea to be a helpful neighbor.  Every artist on this book provides great work that alongside the stories will leave you guessing on at what will happen next or wondering why a good guy looks pretty creepy! The book’s cover art is simply spooky, yet fantastically awesome. As that is not someone I’d want to meet in a dark alley! If you’re still sleeping on this title, now’s the time to wake up and get yourself familiar with the inner workings of Death and Heske. After all, what's to lose? Its only Death!