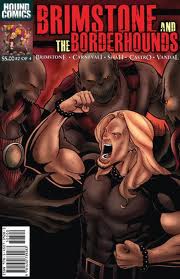 Summary: NYPD Detective Altar is hot on the trail of the serial killer he single handedly captured almost a decade ago. A serial killer he saw executed for his crimes. Now it appears the savage Mr. Hostile is back and spreading fear throughout the city and Altar will stop at nothing to find out how and why Hostile has returned, and stop him. Meanwhile in "Hell," Brimstone and the Xibalba unit fight to stay on top of the Borderhound leader boards and soon find themselves as pawns in a dark plot to unravel all of existence....

Review: Well Mr. Nuts has struck again and in particularly gruesome fashion at that. Even though this is only a comic, I really do feel sorry for his victims. Especially since he’s rambling instead of just getting the act over with. Not sure which is worse, demented rambling or getting the dying over with. I do have to wonder how he managed to get his message on the side of that building though, despite the disturbing aspect of it. I’d say Brimstone and Carnevali certainly are accomplishing a freak out factor with this comic. Which clearly shows their commitment, especially to horror related areas. And while the character Brimstone thinks its not his and his team’s problem that cargo holds are increasingly attacked, I get the feeling he’ll soon be wishing it was not his problem. The art, along side the cover art continue to be fairly awesome. I like how he’s basically sticking it to ‘The Man’ so to speak in the cover. And boy, this commissioner certainly is no Jim Gordon! Batman would pimp slap this guy for his slight douche baggeryness! I get you wanting to keep things on a level of secrecy, but to act like a straight up jerk? Come on now!

And boy, our boy Brimstone sure does have some problems. But I think this loud mouth will get his one of these days. Although what happens to his RV is a nice touch. I like that there’s a bit of history between Detective Altar and Mr. Nuts. As I think it helps make this story even more interesting. Especially now that he’s essentially gearing up for round two with Mr. Nuts. The issue ends with a sweet little stand off, one I can’t wait to see blow up in the third issue. And you just got to love dysfunctional families! Wonder how that chat with Brimstone’s brother is going to turn out? So if you haven’t read this issue yet, do so!