Summary: A serial killer is stalking the streets of New York City. A serial killer thought to have been executed nearly a decade ago. Now the same detective who sacrificed everything to capture him the first time, is back on the case and will come face to face with the horrible truth behind the killings and existence, as we know it...

Review: And we’re going back to the land of Hound Comics! This time with a little something that’s kind of spiritual. But with a very different take on the idea, one that would probably anger some hard core Christians or some such. And I’m cool with that, cause its always nice to push the boundaries of comics. I like the foreword of sorts at the beginning of the book that describes what’s going on, along with a few definitions on some things that get mentioned through out the book. Such as those who are considered Weepers once they’ve come to the after life. The cover of this issue has me reminded of Thor, only this guy is a heck of a lot more different, and less of a God.

But can still kick plenty of butt it seems, even if we did only see a little bit of that in this issue. Sajad does good work with the art skills, and I definitely wouldn’t mind seeing more of it. To be honest, the colors Thiago uses, as well as the art I mentioned previously do remind me a bit of some of the skill you would see over at Plan ‘B’ Comics. Which I think is fairly neat. Brimstone and Carnevali have come up with a fairly cool concept. And its one I hope a lot of people come to like. Those in the after life being used as something of a labor force is an interesting idea, and one I’ve never thought about until now. 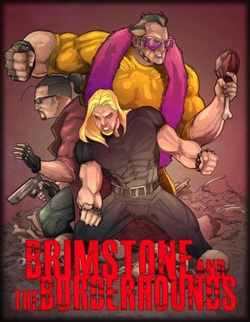 And a douche bag getting what he deserves near the beginning is a great way to start this book off. Even if the one who gave him his just desserts is a little nutty, although I do look forward to finding out if the voice in his head is real or not. Got to admit though, Mr. Nuts has one sweet looking knife. Think ol’ Crocodile Dundee himself would be envious! His little chat with ‘Mom’ and calling himself a good boy has to be the more disturbing part of this book. And is another thing I look forward to seeing more of and how it all plays out. As for this version of the after life, I wonder if those who die here for a second time are gone for good? I know I’ve seen it explored in other material somewhat.

But it is something I’m curious on. I do think a new favorite of mine though aside from Brimstone is Chavez. He certainly enjoys his job! This first issue of the title is off to a great start. And is certainly something I look forward too. Not to mention seeing more of Brimstone’s idea of exercise. Brimstone's buddies Dawg and Luscious seem like the after life's answer to Jay and Silent Bob as well. Only more violent and talkative. There’s also a neat little art gallery in this issue that’s pretty sweet to look at as well. So come on down and give this a chance!
5 out of 5 Stars.

You can find out more about Hound Comics by clicking on this link to visit their website: http://houndcomics.com/index.php