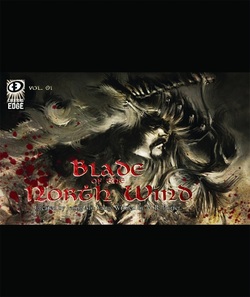 Summary: Set in the fantastical land of Atharú, “Blade of the North Wind” tells the coming-of-age story of a sheltered boy who must grow into a battle hardened warrior in order to save his people from a group of bloodthirsty invaders.

Review: Hello everybody in the land of Comics! Its been awhile since I had the opportunity to read and review a title from Creator's Edge Press. Many, many thanks to Travis Bundy for giving me another great opportunity with this title from Creator's Edge. And if you've never heard of the group, you sir or ma'am are seriously missing out! They've got a selection of titles to choose from that would go great in any comic collection. Among those being the seriously awesome title known as 'Jeff'. And for those of you who may have followed my reviews back on InvestComics, you might recall how much I raved about how awesome that book was. Blade of the North Wind has a very strong old school style story book feel to it. One I think actually works very well. Lack of dialogue and only bits of description are a big part of this story. Mo Yang's art through out the book is pretty amazing. And is something I wouldn't mind seeing as part of a movie. As I think it would be rather sweet. V.R. Porter's writing skills went really well with this book.

The mention of the only law being that of living and dying by the Sword is a concept I rather like. It might be morbid to some. And probably harsh as heck at times, but it is a way of life for some. At least for those who consider themselves warriors and wield swords. The Kgarra sound very familiar to me, but I can't place exactly why. Granted, I could be just thinking of the WWE group 'The Ccore'. But these bunch of demons are a whole lot more bloodthirsty than that group ever could be. I sure hope you aren't the type who's easily queasy. As there will be some blood and gore through out the book. Which Mo Yang's art again is something that does the blood and gore all pretty great. And the Kgarra demons aren't the type of folks I really don't want to find myself in a dark alley alone with. I know I'd want the best weapons available if a war ever happened with them! I'm rather curious about this hero who later shows up, and just how he was able to kick the crap out of the bad guys so easily. Hopefully in the next edition of the North Wind we'll get some answers. Although, hopefully not at the expense of those fun loving kids' lives.

I get the the feeling Dresin is going to have more of a role in things then even he realizes. Although if I'm wrong on that, feel free to come find me and slap the mess out of me. I'm kind of curious about the drawings his sister did. And if they too have some big part in the events to come. This is something that everyone should read at least once, and add to their collection. As cause I mentioned, Creator's Edge is always bringing about some great titles. Granted, the fact this ends in a freaking cliffhangers of all things has me wanting more. Porter did a good job in that area as well in leaving us like that. So if you haven't gotten the opportunity to read this, what are you waiting for!? Get out from under that rock and join in on the start of what's sure to be a bloody adventure!
5 out of 5 Stars

To grab yourself a copy of this sweet little title. Head on over to the Creator's Edge website!