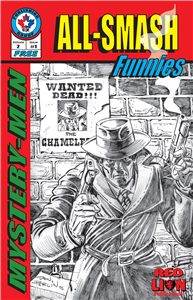 Summary: Take a trip back to the 30-40's in some original golden age stories with All-Smash Funnies from CE Publishing group. Dive into this world of action and adventure! This book features all of our favorite mysterymen like Mister Chameleon, the SnowMan, the Black Rose, Tommy Rotten and more!

Review: Brought to you by Red Lion Publications, and CE Publishing Group This
issue features a show case of the “Mystery-Men” as prominently featured on
the cover.

So who are the Mystery Men? Each story of this issue delivers a solo
adventure from 1 of these vigilantes / detectives. In short well written
narrative with clean panels, each story documents a unique endeavor and
cast of characters. The material is original and sprinkled with action and
intrigue.

First up is a story of revenge by a man who takes on the alter ego of the
Chameleon. It’s a short story that ends in a simple payoff. 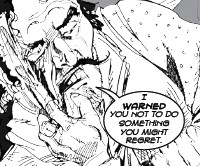 Following that is a classic style tale of “the Snowman”. Set in pre-World
War 2 era, we are introduced to the crime stopper and protector with an ice
gun, heroically titled as the father Mystery Man of twentieth century
America; The Snowman. His story ends with a little bit of a lead in to his
next appearance.

The next story is a non illustrated piece about a man of hard luck that
turns into the most notorious gangster and proceeds to live a life of hate
filled crime, until a tragic event turns his perspective around. I had a
hard time finding a moral or really appreciating this story, but it is
interesting from the get gone.

The next is an odd tale of an archeology dig in Greece that goes
surprisingly off course. 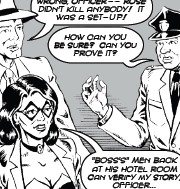 Mysterious and ancient items from the dig transform a man into powerful a
Greek entity. I can’t particularly say I enjoyed this one but it did manage to keep me guessing, and change up the pace, although I’m not sure it fits in this
group of crime capers.

The final story features a female hero described as the Black Rose. It’s
is more of a mob boss thriller, with old school fisticuffs. Not bad for a
couple pages. As for the art, even though it’s plain and basic it compliments the
stories well. It’s good to appreciate the simple inks and streamlined approach; everything looks just the way it should.

Overall this is a decent collection and chock full of original content and
nice variety.
comments powered by Disqus
Powered by