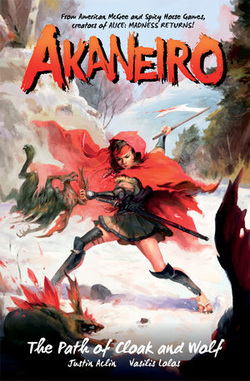 Akaneiro: The Path of Cloak and Wolf
Dark Horse
3 out of 5 stars
Story by Justin Aclin
Art by Vasilis Lolos
Colors by Michael Atiyeh
Lettering by Michael Heisler
Cover by Shu Yan
Reviewed by David Paul

Summary:  From the brilliant imagination of video game auteur American McGee comes a dazzling reenvisioning of Red Riding Hood set in the wondrous world of Japanese folklore! A young woman torn between two cultures takes on an epic adventure battling devious yokai for the fate of her world! Collects the three-issue miniseries.

* Based on the hot new game by American McGee’s Spicy Horse Games!

Review: Dark Horse has a long tradition of publishing quality story-telling accompanied by the kind of art Marvel and DC would snub. Their comics and graphic novels stand out in the mainstream (and you’re kidding yourself if you don’t believe Dark Horse is mainstream now) because they have worked hard to own a signature look. Meaning when you open a Dark Horse comic you know you’re reading a Dark Horse comic without ever seeing their very prominent company logo. In this regard the art of Vasilis Lolos (paired more than competently by the colors of Michael Atiyeh) certainly fits in with the Dark Horse standard and cements their careers individually.

It’s refreshing here not to see another Mike Mignola outing. Ya know? I love Mignola’s work, but yeah. Give someone else a chance!

The story by Justin Aclin (Star Wars: The Clone Wars) is an adaptation of the game by American McGee and Spicy Horse Games. He handles it well. I’m not at all familiar with the game so everything I know now I learned from Aclin’s adaptation.

What we have here is a fantasy setting in place of Ancient Japan, a setting under constant threat by demons. There are two castes (or orders): one aristocratic the other protectors and hunters. Neither understands one another’s ways. When a sacred ceremony is interrupted by a demon it nearly provokes a war between the castes but emo girl Kani volunteers to act as a liaison in the hopes she can get away from her over protective father and her whole tribe because, “God. Stop talking to me. I hate you people!”

Oh. And don’t forget the Karma Crystals. Demons burst into them when they’re killed. Because. Ya know? Mario, Sonic or Cloud or some other antiquated 8bit RPG character needs ‘em and you better be ready.

Did I mention Samus? Oh she’s here too, as the leader of the hunters who takes on emo girl as a trainee. That is, after her journey to Mordor, where she meets the Big Bad Wolf and totally gets lost. Man, I never do very well as a trainee. The first day is the worse. There are always people who want to talk to you and tell you what to do and what not to do – and what is up with all those boring videos??

I would actually like to see Aclin take this to an ongoing series, as I think it deserves to stand on its own apart from the game. As it is here it acts as an introduction or a companion to the game. For me that’s not satisfying.
comments powered by Disqus
Powered by