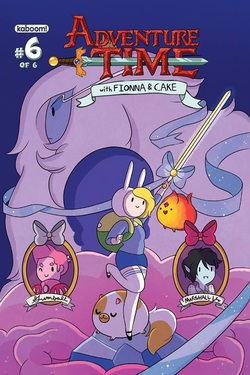 Summary: In the final chapter of this 6-issue epic, the final battle between Fionna and the Ice Queen comes to its fiery conclusion! And only one will come out alive!

Review: I’m not really sure how long ago it was that I had reviewed the previous 5 issues, for whatever reason I never was able to get around to reviewing #6. Until now. I remember thinking how uneven this story felt, like the writer was stalling for time to have exactly 6 issues when she obviously didn’t need that much space. I went back and re-read #5, and found I was able to pretty well read it without having to read the previous 4 issues which was good. So after a break and more experienced eyes have gone over issue #6, does this mini-series hold up as a whole? And is issue #6 on its own merits any good and worthy finisher to this story?

To answer the first question, no the mini-series as a whole is still very uneven and not a great arc as a whole. It’s dragged through the mud only to come to a conclusion that barely builds on anything before it except for mostly the previous issue. That being said however, I found myself having a lot of fun with the last issue and I’m glad I didn’t have to go back and re-read all 5 previous issues to understand it. That would’ve left a bad taste in my mouth.

As a whole, this ending is entertaining to read with lots of action and some well-paced character growth. It also reminds me of how dark the Adventure Time universe can be, it’s not overly in your face gritty, but there are times when it gets “real.” The Ice Queen of this universe was infinitely more fascinating to watch than the Ice King of the main AT universe, and I hope she returns one day to plague our heroes.

A lot changed in this story for our characters, and that’s good. Well, I think it did, the ending made it seem as nothing has changed at all and I really don’t know what to think of it. If this story was magically whisked away in a few panels as if it never happened, then this whole mini-series was a waste of time. But I’m going to remain vigilante and assume that is not the case.

﻿The issue opens up with a story totally unrelated to the main story, and I think it was simply put there to fill page space. It wasn’t treated as a secondary story, just a part of the overall narrative. Normally I’d care about this, but at this point it doesn’t really matter. It wasn’t even that bad of a tiny tale, I rather enjoyed it.

The art is just as strong as usual, although one of the fundamental differences between the main AT world and the Fionna & Cake AT world I’ve noticed is in Finn’s reality everything is more noodle-like, and in Fionna’s world is more rounded. I actually like the rounded look of Fionna’s world better. There’s just something about that seems to really fit.

There are no back stories by other creators in this issue. Which I think is for the best. It probably would’ve felt weird after this being the finished tale of Fionna & Cake’s latest adventures. Well, I did like this issue. Standing on its own, it’s pretty dang good, but being tied to a drawn out 6 issue tale does knock it down a few notches.﻿
Final Score: 3 Immortal Water Nymphs out of 5
comments powered by Disqus
Powered by