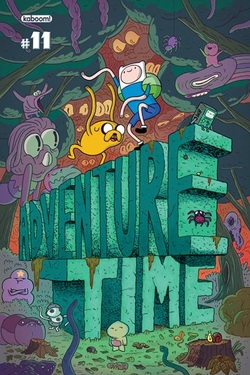 Summary: A story set within the realm of the TV show Adventure Time, featuring Finn the Human, Jake the Dog and Marceline the Vampire Queen as they set out on a fun day of relaxing and playing video games. But how will they handle the situation of getting to go inside of the video game?

Well, if you know anything about Adventure Time, you’re probably already aware our heroes are incredibly stoked and ready to beat the crud out of some bad guys.

So here we go, oh my glob, it’s an Adventure Time review!

Review: I will be the first to (sadly) admit that I am not well-versed in the overall lore of Adventure Time and the world its characters are set in. I do however understand most of the basic stuff and know a bit about each main character, because I have plenty of friends who are huge fans of the show. It’s not that I choose not to watch it; it’s merely by the time I discovered it, the series was quite a few episodes in and I prefer to start at the beginning. So until such a day arises that I can buy the seasons on DVD, I can only give my opinion of this adventure through what I do know, and what I experienced when reading this.

From what I know, Adventure Time is set in a dystopian world where weird creatures have popped up across the land after what I believe was a nuclear fallout that left the world vastly different than what it was before. The story follows our protagonist Finn, who is the last human and his trusty best friend Jake, the magical dog. They go on random fun adventures and live only for the thrill of living but often times have to face off with the goofy yet terribly evil Ice King. Through their adventures they have befriended many characters such as Princess Bubblegum and Marceline the Vampire Queen, who is just about equal in having as much fun as Finn and Jake. They also have another friend, Beemo (or BMO as we’ll call him here), who is basically a walking-talking Gameboy Color.

It’s BMO and Marceline that play the biggest part in this adventure with Jake and Finn, as on this day Marceline shows up to hang out with the Finn and Jake and she arrives just in time for BMO to propose a day of gaming for our young trio of heroes. But not just any kind of gaming, today is special because he has an older game (but new to them) that he found for them and he’s going to allow them to go inside of the game and beat it. But if they die in the game, they die in real life.

Yeah, it’s too good to resist I admit.

“Oh my glob, is this the hardest, most fun game ever in time?” – Finn the Human.

You got that right; this is SUPER GUTS PUNCH 3!!

The writer, North, did a great job describing the game and showing it off, which of course was amplified by the pencils of Paroline or Lamb (I have no idea which one did the video game segments). Reading the game sequence was a lot of fun as a gamer myself who grew up on retro games (it really has the look and feel of an old SNES or Gameboy game) and has a deep love for them. Everything in this comic is witty too, and the characters play off each other very well.

The whole issue is mostly them playing in this game, where to free a Prince from evil forces they must travel into the Prince’s body and beat out all the bad guys there. But the sequences outside of the game are very strong as well. If I watched the show this is how I would imagine the characters act.

Though I did wish this story would’ve been a done in one, I don’t know how they plan on continuing the storyline, but overall it felt like it could’ve still been contained to just one single fun issue of playing a fun looking video game. There is a subplot here and it’s mostly at the end of the game (because all the villains were K.O.’d in one hit each time) out heroes discover that the game was hacked by some mysterious fellow “Ewlbo.” After they exit the game and return to the real world, they discover BMO is now acting weird as well. He’s being harsher towards the trio, which we’re told is not like him. And so the issue ends with our heroes wanting to figure out what’s going on and if BMO has been hacked by this Ewlbo person (creature, thingy?).

It’s an interesting set up nonetheless, but since it came at the end of the issue with no real foreshadowing until halfway through the issue before the reveal, the whole thing still feels 75% of the time as if it could’ve just been a one-shot of fun. Also, Jake’s name is said once and Finn’s name is never said at all so this isn’t a great jumping on point for new readers who’ve never heard of the show (or have seen it) and would probably just be confused by everything going on. I think there should’ve been a page in the front at least giving a brief character bio of the main characters featured in the story.

The art is gorgeous and incredibly reminiscent of the art style of the show, it feels like a true extension of the show in that regard and the coloring again makes this feel so. Much praise for the art and coloring. Lettering was also spot-on, nothing felt forced into its bubble, even the ever changing fonts meshed well together so it was never difficult to read or understand. Except for BMO, he was a little difficult at times.

And I will talk about the story in the back of the book briefly, but there’s not much I can say about it; I know none of the characters featured in this thing. And there’s no real info given to us to get to know these characters. But a big muscle bound broad named Susan in an odd but particularly interesting cat suit shows up to save some “thingies” as she calls them (I have no idea what to call these little creatures myself) from a giant lizard monster, who tricks her into going on a fighting spree battling and beating up all the monsters the two of them can find. They then come across a monk-like humanoid who teaches Susan the error of her ways and she beats the lizard monster up for tricking her. It’s only 7 pages.

Despite not knowing anyone, the story was a fun little romp and it was nice to see all these other kooky looking creatures that make up this world. And they’re very original looking so it doesn’t get boring. The art is also very nice to look at it and really fits the slightly grittier tone this story takes on beside the much more lighthearted tone of the main story. But it also doesn’t feel out of place either, so I give kudos where kudos is due.

All in all, this was a fun little romp of an issue, if I read the next issue it will probably be in trade but I’m sure I’ll get to it eventually. If I end up really liking the TV show, I will most definitely immerse myself into the comic adventures. And it’s good to know that even with someone who knows so little here, I can still enjoy a solid story and some simple clean fun like this.

(Wait, so does this mean we cut one Thingy in half? Hmm, Susan might not like that…)