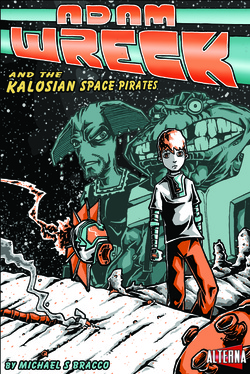 Summary: Adam Wreck is trapped in the deep cosmos of space…with his parents!!!  For two years Adam has traveled through the universe with his genius parents - on a ship they invented called EARTH 1. Life for Adam is about to take an exciting turn when his family's ship is attacked and his parents are taken captive! Shipwrecked on a strange planet filled with even stranger alien creatures, Adam must find a way to save his parents from the diabolical and dastardly, Kalosian Space Pirates!

Review: Its time to be welcomed to the fine world of Alterna Comics! And we are getting introduced in a very enjoyable way with Adam Wreck! This is one of those titles you and your kids, grandkids, or what have you can all sit down together and read. As Adam is a young guy they can all relate too. Especially those that have to be with their parents no matter where they go in the world due to a job of some sort. This also feels like one of those old school story books one would read when they themselves are at that young age. Which makes for another plus in this story. The art, the writing, and the little use of color aside from orange all go great together. Especially the cover on here, that’s just fantastically done! I love that Adam’s space helmet can easily come off and on with just a word, as that makes it really convenient when you’re in a hurry to get it off. Something NASA ought to look into. Adam’s wish for something to happen certainly gets granted, but not in the way he wanted! And if he ever thinks about it after the whole adventure is over with, he’ll probably be more careful about what he wishes for!  Darned space pirates and their need to pirate! The pirates themselves look like animals you would see on Earth. And they look really ugly too. Giving them a certain kind of look that would help show how dangerous they are.  Pity that’s how first contact happens for Adam and his parents.

And I don’t know about you, but that tentacle monster looks kind of adorable. The character of Voric actually kind of reminds me of a goat. I don’t know if this was meant that way or done with out realizing it. But its pretty cool. And his kind of grumpy behavior seems to fit a goat too! I love how Michael has given a reasonable explanation for how everyone can understand each other. And I think it works rather well considering that it was created a long time ago in this story’s history. Makes me wonder though if there’s ever been any side effects from the gas. Another of those things scientists should try and come up with. Would make talking to that pretty girl who doesn’t speak a single bit of English a lot easier! Despite Voric’s demeanor towards Adam, its easy to see he starts to quickly like the kid. I suppose it helps somewhat when said kid helps him find a star that’s very valuable. And speaking of the star, who makes something that has the potential to destroy with relative ease!? Oh wait, crazy folks and the like! Not to mention the neat fact it doubles as a map. Michael’s creative imagination did really well for this story, as where else are you going to find a space ship shaped like a fish!? And submarines don’t count. Adam’s name for the ship is rather funny as it fits the ship very well! The final showdown with the space pirates end with some rather amusing results. And probably makes a certain tentacle monster very happy to have some new playmates. Got to love Voric’s change of heart after he tries to leave Adam and his parents in their situation. A look shared between Adam’s parents after a question is asked has me a little curious after all is said and done. Cause it kind of seemed ominous. Either that or I’m just imaging it. This is most definitely a book you and any youngsters are not going to want to miss! And here’s to hoping a sequel will happen!